The next book I’m going to write about is called God Touched (The Demon Accords) by John Conroe and it’s the first instalment of a series that’s extended just recently to number 5, with more coming soon. 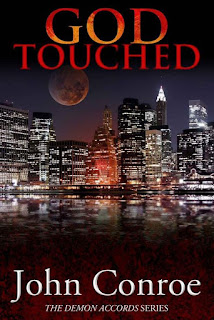 The others in the series

Chris Gordon is a rookie with the NYPD - one with a secret. In his spare time Chris is an exorcist without equal with a gift from God.

But when he saves a beautiful girl from a demonic attack, he discovers there is more to fear than just demons. Finding himself surrounded by vampires, were weasels, and facing a giant short-faced bear, Chris struggles to stay alive, all while protecting his deadly new girlfriend. And then there's her over protective vampire mother!


This isn’t a fantasy book. Well, technically you can call it fantasy but not fantasy (I hope you know what I mean). It’s more urban/horror fantasy, the type in which vampires, demons and witches are involved. I'm not usually one to read that type of genre as it's mostly littered with half naked men (try walking up to a cashier with that type of book!), but this book felt different with a male protagonist.

The main character is called Chris Gordon, and is told through his voice. One of the key benefits of having a book told through a single point of view is that it's easier to form a deep connection to him/her. I instantly came to like Chris from the start. This is a guy who doesn’t back down when he’s supposed to, who doesn’t endlessly ask that annoying question, ‘why me?’ He’s not arrogant and he’s not whiny but a guy who realises the position he’s in and gets on with it.  John Conroe has done a wonderful job in creating such a believable and likable guy in Chris. I got to the stage where I was bored of reading about immature characters that couldn’t see the obvious until it slapped them in the face and so it felt like a breath of fresh air when I came across Chris.

The storyline is also fantastic. It hooked me in from the start and without giving too much away, the book is about Chris Gordon, a rookie New York police officer, who not only fights criminals but demons as well. While he was young his whole family was murdered by demons save for his grandfather. And from there on his army-veteran grandpa trained him so that he could fight demons and not become a victim himself.

The story only truly begins when he saves Tatiana, a vampire princess, from a demon attack.

What I loved about the book was the dialogue, the interaction between the characters. It felt natural and in no way awkward or cumbersome. I could just picture myself in those scenes and that is how I would respond.

It is a self published book and as I highlighted in my last post - Revelyn, it's difficult to completely erase typos, but while flying through this book and the others in the series I hardly noticed any errors, apart from the odd one.

The book combines action, mystery and romance superbly and at no time while reading this book and the others did I put my kindle down. I think I must have read the first book within a few hours, closely followed by the next three. I was then stuck in that endless waiting game for book five until it had been recently released a month ago.

John Conroe has created something special here. I hope this post has shown you at least a glimpse of the excitement/enjoyment/appreciation I have for these books.

I cannot recommend this book and the others highly enough. I’m lucky enough to have stumbled upon them and I hope you don’t miss out.

I’m not going to review the next four books in the series as I feel I’ll only be repeating myself. They're all as fantastic as the first so I hope you get the hint.

8 stars - Awesome book. You might be wondering why I haven’t given it a higher rating but for me 8 is close to perfect and there was the odd typo.