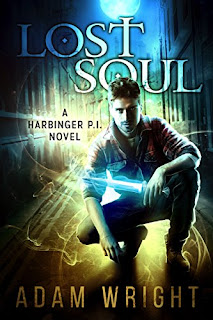 I’m the guy you come to when your spouse gets bitten by a werewolf, or your honey is kidnapped by a demon. I’m the guy who knows how to save your ass when an evil sorcerer casts a curse on it.

At least, I was that guy until the Society of Shadows sent me to Dearmont, Maine, a sleepy town that had a zero rating on the supernatural occurrences scale.

My plan was to spend my days sitting in the office with nothing to do except drink coffee and eat apple bakes made by Felicity, my new assistant.

But when a woman hires me to find out if her son has been possessed by a demon at a rich kids’ party, and a young man comes to the office insisting he’s been bitten by a werewolf, Dearmont goes from zero to hero.

Oh, and did I mention that someone in the Society wants me dead?
Time to sharpen the swords and go to work…


Before I begin, I have to admit that I didn't have any great expectations before reading this book. There seems to be a lot of urban fantasy books nowadays based on a P.I and I have to say most of them are pretty forgettable. It just seems the genre is swamped with a lot of sameness, but the book was going for free on Amazon and I thought I'd give it a go.

The story centres on Alec Harbinger, Preternatural Investigator, who works for a secret magical society, but he finds himself in their bad graces and as a result has been shunted out to Dearmont, Maine.

The book does follow the same cookie cutter formular as most other urban fantasy novels but honestly I enjoyed it.

And there's a couple of reasons why;


If you want a quick, entertaining story based on a likeable character, then you can't go too far wrong with this book. I enjoyed it and now I'm on to the sequel.

Amazon US
Posted by Fantasy Muse at 18:11