Wrapped in Rain: A Novel by Charles Martin 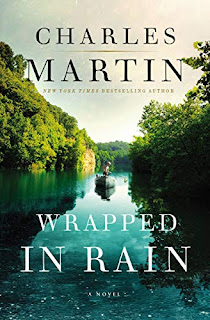 An internationally famous photographer, Tucker Mason has traveled the world, capturing things other people don’t see. But what Tucker himself can’t see is how to let go of the past and forgive his father.

On a sprawling Southern estate, Tucker and his younger brother, Mutt, were raised by their housekeeper, Miss Ella Rain, who loved the motherless boys like her own. Hiring her to take care of Waverly Hall and the boys was the only good thing their father ever did.

When his brother escapes from a mental hospital and an old girlfriend appears with her son and a black eye, Tucker is forced to return home and face the agony of his tragic past.

Though Miss Ella has been gone for many years, Tucker can still hear her voice—and her prayers. But finding peace and starting anew will take a measure of grace that Tucker scarcely believes in.

I've read most of Charles Martin books, and I have to admit this one was my least favourite. I've never been a great fan of flashback, but sometimes they can work well, and Charles Martin usually does do them well, but in this book there were just too many for my liking, and not enough progression with the storyline.

I also felt the plot was a tad incredulous to believe, and while I like to read principled characters; the main characters were too moralistic, to the point they shone so brightly that it hurt my eyes.

This is one of his early works and you could tell it lacks the refinement that his current books have—for fans of Martin, I'd say it's not a bad read, but don't expect it to be great one.