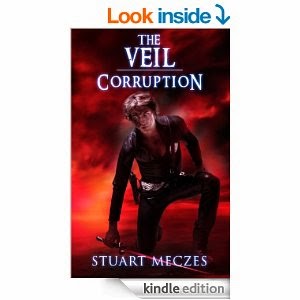 It’s been six months since Alex and Gabriella stood against The Sorrow and won. The Veil still stands uncrossed, and with every passing day the possibility of finding the person stolen from Alex alive diminishes. But after an influx of new Awakenings, the Alliance is being stretched to breaking point. A melancholic Sophia is acting mysteriously and Sage Faru has set the formidable task of gathering a team of Guardians willing to enter Pandemonia. Meanwhile the looming threat of a new, stronger SOS hides in the shadows.
But that is the least of Alex’s worries.

Something is growing inside of him. Something dark and vengeful that whispers in the silence. Something that plagues his dreams with visions of a horrifying apocalypse.

An apocalypse he will start.

As Gabriella struggles to hold everything together and Alex struggles not to fall apart, one thing becomes clear. Before they can cross the Veil and stand against Hades, Alex must first defeat his greatest enemy. Himself.


This is the sequel to the first book in the Hasea Chronicles, 'The Awakening', which I reviewed a while ago. The first book was fantastic and was one of my favourite urban fantasy books of last year, so I definitely had high expectations going into the sequel.

The first book left it in a bit of a cliff hanger where the main character, Alex and his friends were about to set off to the Veil, where his father is believed to still be alive.

Honestly, I was a bit disappointed in the storyline. I was looking forward to reading about the Veil and discovering what adventures lay beyond, and so I felt a little let down that they they didn't get there. Instead the whole book was spent preparing to go to the Veil. However the story wasn't all bad and the novel finished on a dramatic high, with all the great traits of the first book came flooding back.

Characterisation was spot on, and I enjoyed the twist in Alex's character as he struggled with his inner demons. He continued to grow from the first book and Meczes did a good job in adding further layers of depth to Alex. The other characters also got a fair look in.

The action scenes were brilliantly written, just like the first book, and the author has a way of creating vivid, tense scenes that are easy to picture.


Not as great as the first book, which admittedly set the bar rather high, thus making this review appear more critical that it perhaps warranted. The book still held much of the qualities of the first, just not enough. Now I'm looking forward to the third book in the series, which should be out soon.

Amazon US
Posted by Fantasy Muse at 11:39 No comments: 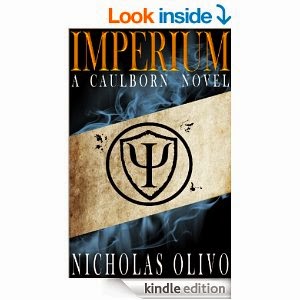 Vincent Corinthos leads a triple life. As a secret agent, he handles paranormal threats; as a god, he protects his followers from evil forces; as a stock clerk, he keeps the back room of an antique store tidy.

When one of his fellow agents goes missing, Vincent begins with the usual suspects. His investigation reveals that Boston’s latest supernatural threat is also waging war on his followers, and presents a grave danger to the city's paranormal citizens.

Now, with the aid of a new partner and a gremlin, Vincent must locate the missing agent, defend his followers and learn the identity of his adversaries before they can revive a malevolent force that’s been dormant since World War II.

The story is based on Vincent, who is part of a secret society called Caulborn, that are basically like police of the supernatural community. When paranormal beings are getting kidnapped, it's up to Vincent to find out who's behind it.
As urban fantasy books go, this is fairly generic - you have your main character who is, of course like a P.I (why are they always P.I's? I mean is there no other jobs out there for them?), he has that charismatic personality (think Harry Dresden, Atticus) and he get's into trouble more times than you can count. So...

What makes Vincent different, well, he's a half-god. Like me, you may be thinking what a cool main character, Vincent, is going to be, but you'll be mistaken. Vincent is probably the weakest god (half-god) you'll ever read. There doesn't go chapter where he doesn't get his ass handed to him and it's only through the faith of his flock that gives enough powers to make a hasty get away. You see Vincent is a god of race of beings called Urisk (in my mind I'm picturing E.T) who are fae beings that live on another realm to humans.
Which isn't a criticism if you want your hero to be vulnerable and not all-powerful, but I think the pendulum has shifted from one extreme to the other, so much so, that most authors are too afraid to make their protagonists badasses in fear that it'll turn readers off. Count me in the minority, as I enjoy reading the hero who isn't constantly running away from the bad guys and who can give back as he good as he receives. That's why I read books - for the good guys to beat up the bad guys. If I want realism, I'd just switch on the news.

The other characters in the book were interesting and had unique personalities, and in fact several of them could easily have been chosen as the protagonist rather than Vincent.

In terms of writing and structure of the novel, I can't fault the author. This is a well written book, with no typos or any silly mistakes and the pace of the plot while slow at the beginning, picked up nicely in the middle.


I didn't enjoy this book as much as others will no doubt do. Overall the novel has a lot of appealing qualities that will satisfy most readers who enjoy urban fantasy - and so I'm in two minds on how to conclude this review. Instead, I'll finish by saying that my review is more down to individual preference.

Amazon US
Posted by Fantasy Muse at 11:23 No comments: