With the end of the year upon us and Christmas next door, I though I'd reminisce on the books I've read this year, and to briefly mention my best ones of 2014.
I've broken this down to categories as I feel it's a bit unfair to just mention one book. So without further ado:

This is a rather simple choice for me. It goes to Joshua Jared Scott The Zombie Apocalypse series. I think I did a review of the excellent first book, and both the second and third book follows in the same rich vein.

This goes to Gone to Ground by Cheryl Taylor. It's not technically a romantic novel but I thought the romantic aspect - which is cast amongst a back drop of a post apocalyptic world - was done really well. Normally when authors do romance, it's usually too mushy, scripted or rushed, but I felt this book was done right.

I couldn't look past John Conroe's latest book Forced Ascent. His series, The Demon Accords, is the best collection of urban fantasy books I've had the pleasure of reading so far. And his latest book seamlessly picks up from the last.
If you haven't read any of his books, then you're really missing out.

My top fantasy book of 2014 is none other than Daniel Hylton's concluding book in the series, 'The Stronghold of Evil'. I remember fondly the first time I stumbled upon his first book and I'm not ashamed to say I had glassy eyes when I finished reading the last book in the series. His books have had an impact on me; similar to that of Tolkien's LOTR had on me when I was a young boy.
I've already re-read the entire series three times and no doubt will again.

There's quite a few books that I could mention, but due to the laughable plot, and how costly it was to buy - the worst book that I read in 2014 goes to Sorrow's Point by Danielle Devor.
I found myself in the mood for a good horror book, and I rather foolishly got sucked in by the edgy cover and interesting blurb. Suffice to say, I pretty much spent the whole book rolling my eyes at the ludicrous scenes/characters. And at no point did the book ever inspire even the remotest flicker of fear.
Think a B-rated horror movies and then take another 24 steps back to Z.

I can't finish this post without mentioning some books that narrowly missed out but deserve a mention.

....finally I'd like to wish my readers a happy Christmas/Holiday and a fulfilling new year.
I appreciate you taking the time to read my words/blog, and it means a lot to me - whether you agree or disagree with my views.
And for any regular readers out there (I'm probably being presumptuous here), please continue to follow my blog and hopefully I've given you some good recommendations.

Posted by Fantasy Muse at 17:18 No comments: 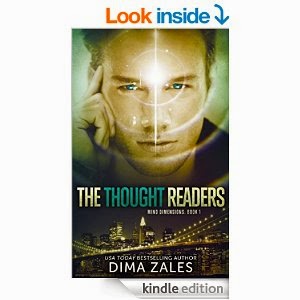 Everyone thinks I’m a genius.
Everyone is wrong.
Sure, I finished Harvard at eighteen and now make crazy money at a hedge fund. But that’s not because I’m unusually smart or hard-working.
It’s because I cheat.
You see, I have a unique ability. I can go outside time into my own personal version of reality—the place I call “the Quiet”—where I can explore my surroundings while the rest of the world stands still.
I thought I was the only one who could do this—until I met her.
My name is Darren, and this is how I became entangled with all the Russians and learned that I’m a Reader.

It was more by chance than anything that I stumbled upon this book, but I'm thankful that I did.

This is an urban fantasy novel based upon mind readers, but they also have another power that allows them to detach themselves from time. Think the first Matrix film in the scene at the end when Neo stopped time and dropped those bullets.

Darren is the main character, who is a reader. He's 21, graduated from Havard at 18 and is now working for a hedge fund company - all thanks to his powers. And so he's basically living the dream.
He thinks he's the only one that can do the things he can but while gambling/cheating at a casino he comes across a beautiful girl who lo-and-behold also had the same powers.
The story then shifts direction as he tries to learn more about his talents. And along the way there's some baddies that want to do harm to his new crush.

I felt like I found something special when I read the book's blurb and the effusive reviews. You know sometimes when you come across a book that you just take one glance at it and you know it's going to be good.

Well, I bought the book at 10am and finished it at 5pm. So that gives you some inkling at how much I enjoyed the story (and no the book wasn't ten pages long).

The writing was superb. The sentences were witty, sharp and constantly kept the story ticking. The pace of the story was frantic, but good frantic.

Character wise - due to it being in 1st person - you only really get to connect with Darren. He's a well done character, who's not omnipotent but not terribly weak. Rather, he's believable - he's does what you'd expect to do if you were in his position.

The only negatives I can give the book is that it felt too short despite its 300 page print length. It felt a look shorter than that.
Another negative was that it delved a little too deeply into the technical side of things, with a lot of scientific ideas thrown in. I don't mind that, if I'm in the mood for it, which is basically never. But I really am being finicky here.


Fantastic book that I recommend to everyone that loves urban fantasy. Interesting ideas blended with an exciting story and a likeable protagonist makes this a special book. And whilst writing this review I've already bought the sequel.

Amazon US
Posted by Fantasy Muse at 18:20 No comments:

Blood Memory: The Complete Season One by Perrin Briar. 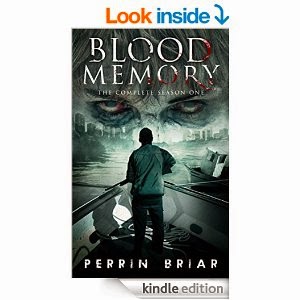 Haven’s crew found Jordan Grant half-dead floating at sea. With a six-year hole in his memory, he remembers nothing of the Incident or the Lurchers who have claimed the land as their own. He joins the crew in their daily struggle to survive in a harsh new world where every meal is live or die.

But when a shipwreck forces them from the safety of the sea, the crew soon discover their pursuers aren’t the only monsters out to get them. As Jordan confronts the horror of his past he unlocks a secret that threatens to destroy not only him but the future of the entire human race.


I rather enjoyed this zombie novel. Normally books of this ilk are all similar in type but there was a small twist to this story that set it apart from most of the others.
The story follows Jordan, a young man who is suffering from amnesia and can't remember the last six years of his life. He's found floating in the sea by a group of survivors who manage to fish him out. From there the story follows the group as they fight to survive in a world infested by zombies.

What I liked about this book was that the zombies were not all lumbering oafs but some of them were sentient and that made the story take on an interesting turn.

The author kept the sentences short and purposeful, which made the story flow quickly. Character development were done well and while the book was told through Jordan's perspective, the other characters had their share of growth.

A big positive for me was the main character, Jordan. He was my ideal type of hero. Not too capable to the point of being boring, but not too weak to the point where your rolling your eyes. He made mistakes, had faults but did the right things at the right time.


An enjoyable zombie book that is one of the better ones I've read this year. And I'll definitely be looking out for the next one in the series.

Amazon US
Posted by Fantasy Muse at 17:49 No comments: