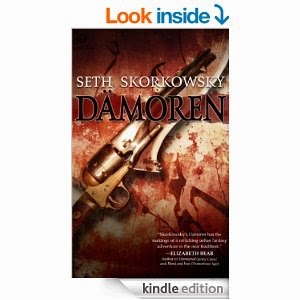 'IN THE SAME VEIN AS SUPERNATURAL, HELLBOY, AND BLADE'

A secret society of monster hunters. A holy revolver forged to eradicate demons. A possessed man with a tragic past. A rising evil bent on destroying them all.

Matt Hollis is the current wielder of the holy weapon, DÄMOREN. With it, he stalks and destroys demons. A secret society called the VALDUCANS has taken an interest in Matt’s activities. They see him as a reckless rogue—little more than a ‘cowboy’ corrupted by a monster—and a potential threat to their ancient order.

As knights and their sentient weapons begin dying, Matt teams up with other hunters of his kind such as LUIZA, a woman with a conquistador blade; ALLAN, an Englishman with an Egyptian khopesh; MALCOLM, a voodoo priest with a sanctified machete; and TAKAIRA, a naginata-swinging Samurai. As the hunters become the hunted, they must learn to trust one another before a powerful demonic entity thrusts the world into a terrible and ageless darkness.

This urban fantasy novel immediately caught my interest from the striking cover. And after reading the description, it didn't feel like the typical urban fantasy stories you see nowadays flooding book shelves.

The book follows Matt Hollis. As a young child he witnessed his family being slaughtered by a Wendigo and during the attack he got bitten by the monster. As a result he became infected by it and soon discovered that he could heal himself miraculously by touching demon blood.
Now as a grown man, he travels around hunting monsters (think Dean and Sam from Supernatural). However, his escapades soon don't go unnoticed as a secret organisation of knights who also like to kill monsters want to meet him.

The book jumped straight into the action and I was instantly drawn into the story. The writing was very purposeful in that not a single sentence felt wasted. Also the dialogue was crisp and smooth. The plot was was fast paced, although it did linger near the middle before picking up near the end.

One of the major reasons why I enjoyed this book so much was the fantastic scary scenes written by the author in which I could actually feel a chill whilst reading the passages. This is how a proper Urban Fantasy should be. Supernatural beings here are evil monsters and not ones you want to cuddle up to at night.

Another attractive feature of the book was the idea that holy weapons are the only things capable of killing demons. These weapons can be anything, ranging from a sword to a gun and they bond to their wielders forming an almost conscious connection. It was really interesting seeing that concept play out and where the author would take it. And it does become a key feature near the end.
By the way, I forgot to mention, the main character, Matt, special weapon was a gun called Damoren.

As far as characterisation goes, I have no real complaints. Matt is your typical stoic, unflinching, selfless main guy. And as a reader you can't help but like him. However, I did feel that he became slightly overshadowed by the other characters, and at times I was left wondering who the main protagonist was.

Despite the confusing finale, I had a great time reading this book. The action scenes had me breathless and the eerie scenes had me almost cowering in fear. Seth Skorkowsky is an author I'll definitely be keeping an eye on, and I hope in the future he tries his hands on horror, because he has real talent in evoking feelings of dread in his readers.

For fans who want to see vampires and demons actually behave... you know, like evil monsters then I highly recommend this book. One of the best urban fantasy books I've read for sometime.

Just a word of caution; there's a lot of gore, violence and death, so maybe not one for kids - unless your called Damien.

Amazon US
Posted by Fantasy Muse at 11:51