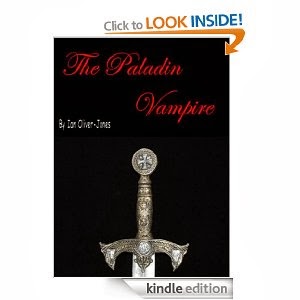 Adulphus Du Brasi awakes in confusion, his memory is nebulous and he has no idea who, or what he is. Later, he starts to remember his past, the Vampire queen Valasca who turned him and his Templar missions are recalled.

His hunger burns within like he has swallowed red hot coals, he feeds with frenzy at first but as the hunger subsides he becomes more selective.

The Templar treasure he escaped the purge with aids his passage. He has a vast fortune in gold at his disposal.

Love finds him again in the form of Catherine, a beautiful young detective that has been assigned to catch the vicious serial killer. They both seek a cure for his condition with disastrous consequences.


The book follows Andrew Brace (yes, it's short for Adulphus Du Brasi), a vampire - who was originally a Knights Templar - suddenly wakes up from a catatonic state. It then follows his story as he acclimatises to this modern era. There is also a parallel storyline involving another main character called Catherine. She's a police detective that's trying to find the culprit of a series of murders involving dead bodies with puncture wounds on their necks. Yes, you've guessed it, she's looking for a vampire, and more specifically Andrew.

The start of the book jumped straight into the action, and I got my hopes up thinking this was going to be a good book, but then my interest started to fade after a few chapters in. Main reason being is I didn't like where the story was going. Andrew is a knight templar, and becomes a vigilante; helping victims and bleeding dry criminals. Think of Angel from the TV spin-off from Buffy the Vampire Slayer and you got it. It was fine the first few times, and I even cheered him on when he took down the bad guys, but it soon got repetitive and I got bored of it.

I also didn't like Andrew's preachy enthusiasm. I can't really fault the author for that; I understand that Andrew was a devout Templar before he turned, and that he's still follows his religion zealously, but at the same time I would have liked it toned down a bit. I don't know, maybe it's just me, as I've always been a little uncomfortable when authors write delve too much into religion. I read fantasy to get away from all that.

Another problem that I had with the book was Catherine. The chapters alternated at times to to her POV and while it hinted that she had some sort of psychic connection to Andrew, it was never really fleshed out and developed. Instead we got to read about her tedious police investigation. We all knew the inevitable was going to happen and that they would cross paths with each other, but that only happened around 3/4 of the way in.
And when it did happen I was tempted to drop the book there and then. The story verged on the ridiculous after they meet. From just first eye contact, they started ripping each others clothes off (not the ripping clothes off intending harm but the one that ends up in the bed). No words spoken at all, they just went at it. And once they've just had sex, they're declaring their eternal love for each other. And then they preceded to ask each others names.

I don't think I've ever read anything quite like that. I don't know if it was a case of the author getting bored of his story and wanting to hurry it up.

It wasn't all terrible though. I enjoyed the author's writing. Ian Oliver-Jones prose was flowery and at times it felt like I was reading poetry. The way he conjured up words and painted them together was really impressive. Also his talent at describing scenes so vividly made it easy for me to follow in my mind, and I honestly can't say that for a lot of authors I've read. It's just a real shame that the story let him down. He's clearly got talent and I can easily imagine his future books becoming successful. Just not this one.

It was tough to finish this book and for me it's a case of forget and move on.

Amazon US
Posted by Fantasy Muse at 14:45